The study of liquid crystals began in 1888 when an Austrian botanist named Friedrich Reinitzer observed that a material known as cholesteryl benzoate had two distinct melting points. In his experiments, Reinitzer increased the temperature of a solid sample and watched the crystal change into a hazy liquid. As he increased the temperature further, the material changed again into a clear, transparent liquid. Because of this early work, Reinitzer is often credited with discovering a new phase of matter – the liquid crystal phase.

Liquid crystal materials are unique in their properties and uses. As research into this field continues and as new applications are developed, liquid crystals will play an important role in modern technology. This tutorial provides an introduction to the science and applications of these materials.

What are Liquid Crystals?
Liquid crystal materials generally have several common characteristics. Among these are a rod-like molecular structure, rigidness of the long axis, and strong dipoles and/or easily polarizable substituents.

The distinguishing characteristic of the liquid crystalline state is the tendency of the molecules (mesogens) to point along a common axis, called the director. This is in contrast to molecules in the liquid phase, which have no intrinsic order. In the solid state, molecules are highly ordered and have little translational freedom. The characteristic orientational order of the liquid crystal state is between the traditional solid and liquid phases and this is the origin of the term mesogenic state, used synonymously with liquid crystal state. Note the average alignment of the molecules for each phase in the following diagram. 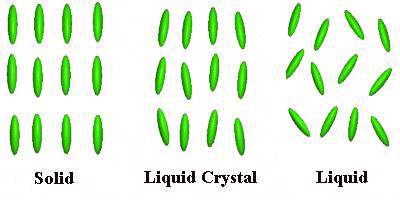 It is sometimes difficult to determine whether a material is in a crystal or liquid crystal state. Crystalline materials demonstrate long range periodic order in three dimensions. By definition, an isotropic liquid has no orientational order. Substances that aren’t as ordered as a solid, yet have some degree of alignment are properly called liquid crystals.

where theta is the angle between the director and the long axis of each molecule. The brackets denote an average over all of the molecules in the sample. In an isotropic liquid, the average of the cosine terms is zero, and therefore the order parameter is equal to zero. For a perfect crystal, the order parameter evaluates to one. Typical values for the order parameter of a liquid crystal range between 0.3 and 0.9, with the exact value a function of temperature, as a result of kinetic molecular motion. This is illustrated below for a nematic liquid crystal material (to be discussed in the next section).

The tendency of the liquid crystal molecules to point along the director leads to a condition known as anisotropy. This term means that the properties of a material depend on the direction in which they are measured. For example, it is easier to cut a piece of wood along the grain than against it. The anisotropic nature of liquid crystals is responsible for the unique optical properties exploited by scientists and engineers in a variety of applications.
Characterizing Liquid Crystals

The following parameters describe the liquid crystalline structure:
- Positional Order
- Orientational Order
- Bond Orientational Order
Each of these parameters describes the extent to which the liquid crystal sample is ordered. Positional order refers to the extent to which an average molecule or group of molecules shows translational symmetry (as crystalline material shows). Orientational order, as discussed above, represents a measure of the tendency of the molecules to align along the director on a long-range basis. Bond Orientational Order describes a line joining the centers of nearest-neighbor molecules without requiring a regular spacing along that line. Thus, a relatively long-range order with respect to the line of centers but only short range positional order along that line. (See discussion of hexatic phases in a text such as Chandrasekhar, Liquid Crystals)

Most liquid crystal compounds exhibit polymorphism, or a condition where more than one phase is observed in the liquid crystalline state. The term mesophase is used to describe the “subphases” of liquid crystal materials. Mesophases are formed by changing the amount of order in the sample, either by imposing order in only one or two dimensions, or by allowing the molecules to have a degree of translational motion. The following section describes the mesophases of liquid crystals in greater detail.

Nematic Phases
The nematic liquid crystal phase is characterized by molecules that have no positional order but tend to point in the same direction (along the director). In the following diagram, notice that the molecules point vertically but are arranged with no particular order.

Smectic Phases
The word “smectic” is derived from the Greek word for soap. This seemingly ambiguous origin is explained by the fact that the thick, slippery substance often found at the bottom of a soap dish is actually a type of smectic liquid crystal.
The smectic state is another distinct mesophase of liquid crystal substances. Molecules in this phase show a degree of translational order not present in the nematic. In the smectic state, the molecules maintain the general orientational order of nematics, but also tend to align themselves in layers or planes. Motion is restricted to within these planes, and separate planes are observed to flow past each other. The increased order means that the smectic state is more “solid-like” than the nematic. 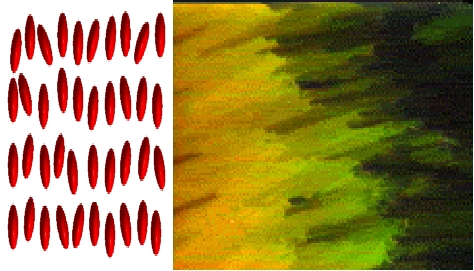 Cholesteric Phases
The cholesteric (or chiral nematic) liquid crystal phase is typically composed of nematic mesogenic molecules containing a chiral center which produces intermolecular forces that favor alignment between molecules at a slight angle to one another. This leads to the formation of a structure which can be visualized as a stack of very thin 2-D nematic-like layers with the director in each layer twisted with respect to those above and below. In this structure, the directors actually form in a continuous helical pattern about the layer normal as illustrated by the black arrow in the following figure and animation. The black arrow in the animation represents director orientation in the succession of layers along the stack. 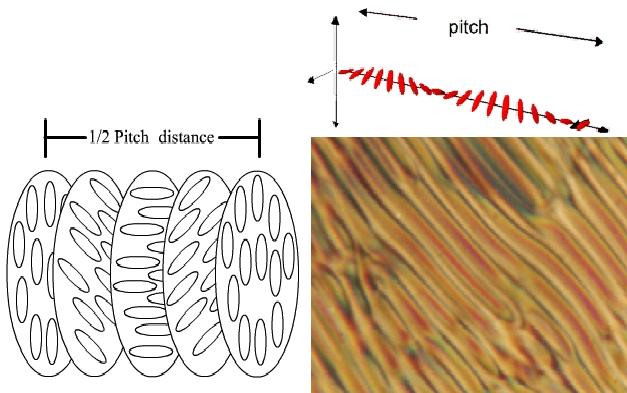 The molecules shown are merely representations of the many chiral nematic mesogens lying in the slabs of infinitesimal thickness with a distribution of orientation around the director. This is not to be confused with the planar arrangement found in smectic mesophases.
An important characteristic of the cholesteric mesophase is the pitch. The pitch, p, is defined as the distance it takes for the director to rotate one full turn in the helix as illustrated in the above animation. A byproduct of the helical structure of the chiral nematic phase, is its ability to selectively reflect light of wavelengths equal to the pitch length, so that a color will be reflected when the pitch is equal to the corresponding wavelength of light in the visible spectrum. The effect is based on the temperature dependence of the gradual change in director orientation between successive layers (illustrated above), which modifies the pitch length resulting in an alteration of the wavelength of reflected light according to the temperature. The angle at which the director changes can be made larger, and thus tighten the pitch, by increasing the temperature of the molecules, hence giving them more thermal energy. Similarly, decreasing the temperature of the molecules increases the pitch length of the chiral nematic liquid crystal. This makes it possible to build a liquid crystal thermometer that displays the temperature of its environment by the reflected color. Mixtures of various types of these liquid crystals are often used to create sensors with a wide variety of responses to temperature change. Such sensors are used for thermometers often in the form of heat sensitive films to detect flaws in circuit board connections, fluid flow patterns, condition of batteries, the presence of radiation, or in novelties such as “mood” rings.
In the fabrication of films, since putting chiral nematic liquid crystals directly on a black background would lead to degradation and perhaps contamination, the crystals are micro-encapsulated into particles of very small dimensions. The particles are then treated with a binding material that will contract upon curing so as to flatten the microcapsules and produce the best alignment for brighter colors. An application of a class of chiral nematic liquid crystals which are less temperature sensitive is to create materials such as clothing, dolls, inks and paints.
The wavelength of the reflected light can also be controlled by adjusting the chemical composition, since cholesterics can either consist of exclusively chiral molecules or of nematic molecules with a chiral dopant dispersed throughout. In this case, the dopant concentration is used to adjust the chirality and thus the pitch.